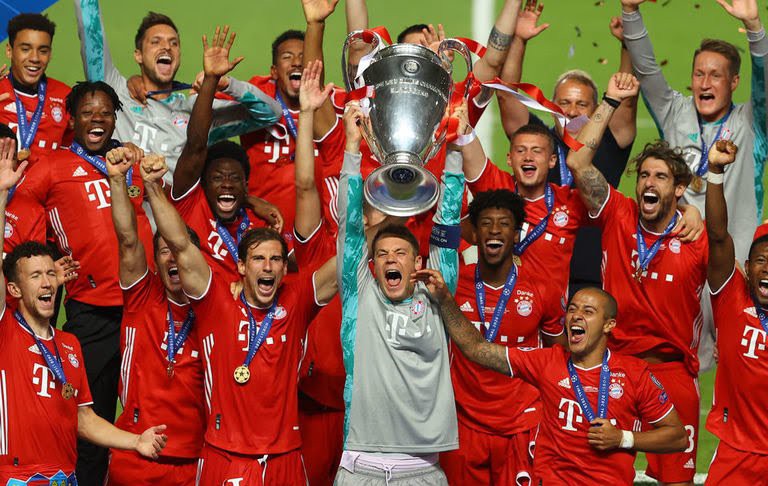 Bayern Munich won the European Cup for the sixth time on Sunday as Kingsley Coman’s goal gave them a 1-0 win over Paris Saint-Germain in an engrossing Champions League final in Lisbon, completing a fantastic season for the German giants and leaving their opponents still searching for the trophy they covet more than anything.
It was often a cagey final, with a bit of needle between the teams, but chances too, especially before Coman appeared at the back post to head in Joshua Kimmich’s inviting 59th-minute cross and wrap up a treble for a team who had already won the Bundesliga and German Cup.
Hansi Flick’s team will feel they deserved their victory, yet PSG will regret not taking any of the chances that were offered up to them on a surreal occasion at an empty Estadio da Luz.
Kylian Mbappe in particular should have done better than shoot straight at Manuel Neuer right on the stroke of half-time.
The France World Cup-winning forward had spoken of his determination to go down in his country’s history by helping PSG become just the second French winners of European football’s greatest prize.
But they will have to wait for the chance to match Marseille, who won the inaugural Champions League in 1993.
The defeat will be especially painful for P.S.G. and its Qatari owners, who have spent a decade and hundreds of millions of dollars to build a team that could deliver the Champions League, the biggest prize in European soccer. But while its star-studded team, led by the Brazilian forward Neymar and the French World Cup winner Kylian Mbapp, created dangerous chances against Bayern, it could never break through.

#BBNaijaLockdown: When we leave here youll know who I am Kiddwaya tells fellow housemates

Akinwumi Adesina Re-elected as President of the African Development Bank